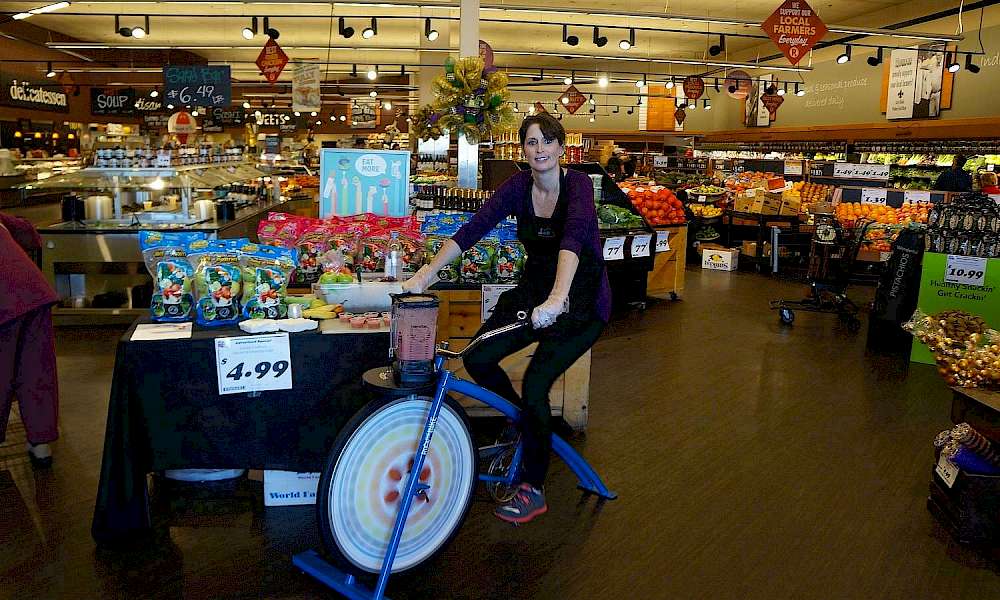 The Retail Dietitians Business Alliance along with our sponsor Stemilt Growers is pleased to announce the two winners of the Rock the Blender Bike Contest: Amy Clark, RD, LD, Lincoln Center Hy-Vee Dietitian in Ames, IA and Nina Struss, RD, LDN, at the Milan, IL Hy-Vee.

Clark plans to use the Blender Bike to encourage regular physical activity and adequate consumption of fruits and vegetables during Hy-Vee’s Springtime Party which has a theme of Fuel Your Body with Health this year.  The promotion will include an employee Smoothie Recipe Contest, where each department in the store will be challenged to come up with their own smoothie recipe using the Stimelt Fresh BlendersTM.  Each department will recruit an employee to ride the bike to make their smoothie.  For customers to be able to ride the blender bike, they’ll be asked to donate a $1 to the Juvenile Diabetes Research Foundation.

Struss’s promotion will span eight cities and 13 stores in the Quad Cities over a two-week time frame partnering with other Hy-Vee dietitians. Their goal of the promotion is to leverage the blender bike to showcase how movement can be fun and exciting, while producing healthy recipes that will be easy to replicate at home with the Stemilt Fresh Blenders™. Hy-Vee’s KidsFit and Healthy You Mobile programs will be tied into the promotion, and a Junior Chef competition will be held.

All applications for the contest were reviewed by members of the RDBA Advisory Board and staff at Stemilt Growers. “The creativity and quality of the applications made it difficult to select just two winners,” says Brianna Shales, Communications Manager at Stemilt Growers. “It’s clear that retail dietitians are experts at leveraging the retail environment to effectively promote healthy living to their shoppers.”

The Rock the Blender Bike promotions will take place in April and May of this year. After the promotions, the impact on shoppers and business will be shared with RDBA members.