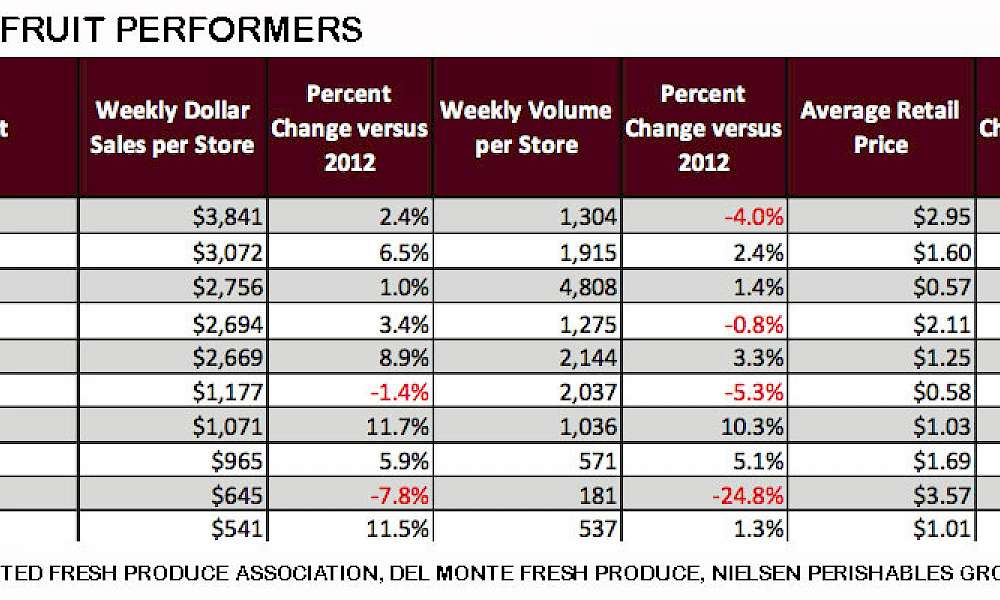 Fresh produce is on a roll. Healthier eating intensifies across America, and supermarkets bank heavily on its colorful appeals as an image setter, traffic generator and profit maker.

In 2013, the produce department rang up $47,209 per week per store on average. That 4.8% dollar sales gain over 2012 was driven largely by a 4.3% rise in the average retail price - which did slow the rate of volume growth overall and caused some dips in select fruits and vegetables, reveals the United Fresh Produce Association (UFPA) in its FreshFacts on Retail: Whole and Fresh Cut Produce Trends: 2013 Year in Review, issued with partners Del Monte Fresh Produce and the Nielsen Perishables Group.

F3 believes households want to keep fresh produce in their regular diets as much as possible, yet many struggle with affordability – so they either trade off to less costly fruit and vegetable choices, or perhaps buy less frequently. Time will tell if SNAP cutbacks pose a risk to produce performance – and if the introduction of newer superfruits such as pichuberry, aronia and gac may face limits on what consumers are willing to pay for them. Retailers that anticipate these possibilities could merchandise select produce items in ways that enhance consumers’ value perception of them. (Highlight superfoods to fortify health image)

The five biggest vegetable commodities are packaged salad, tomatoes, potatoes, cooking vegetables and onions, with weekly sales per store ranging from $1,564 to $3,286.  Yet cucumbers led percentage growth in 2013 dollar sales, up 7.8% to $714; cooking vegetables grew the second-fastest, up 7.0% to $1,743.