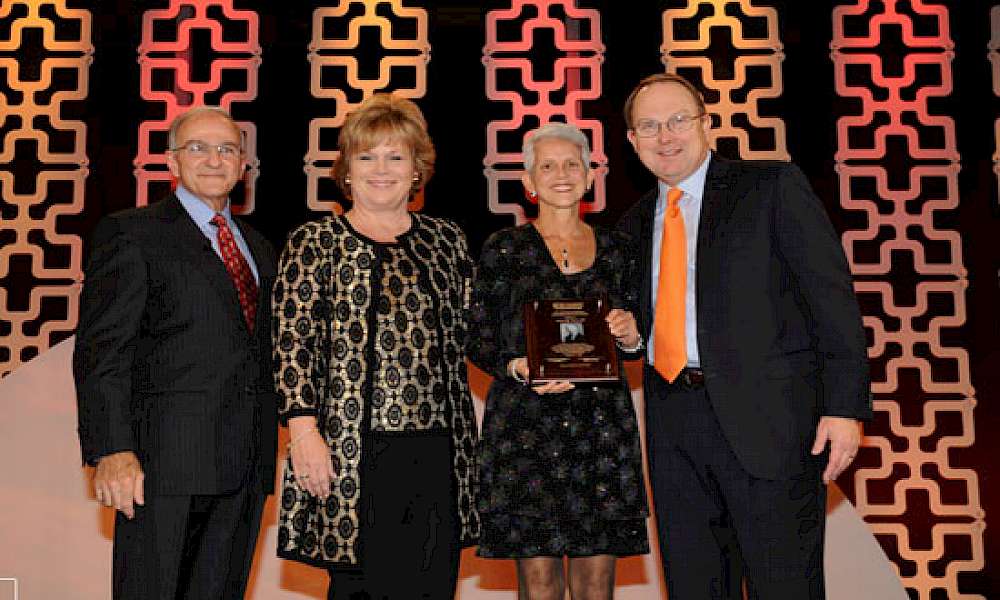 The Food Marketing Institute (FMI) recently honored 36-year veteran of Schnuck Markets, Inc., Joanie Taylor, director, consumer affairs and community relations, with the FMI Esther Peterson Award for her commitment as both advocate and voice of the consumer. Taylor received the award at FMI’s Midwinter Executive Conference earlier this month.

Reacting to her award, Taylor said, “I take great joy in resolving customer concerns promptly and memorably.  I consider it both a responsibility and a tremendous privilege to be the voice of the customer at Schnucks. I also delight in celebrating the greatness of our teammates and shining a light on their exceptional customer service.”

Taylor’s longtime industry colleague and past recipient of the FMI Esther Peterson Award, Wegmans Senior Vice President of Consumer Affairs Mary Ellen Burris, remarked, “Esther Peterson Award-winners are part of a very special circle, and Joanie is so deserving to be in that circle. The characteristic that this job requires, an Esther Peterson winner, is to have courage, managerial courage. It's not always easy to present those, sometimes, dissenting views to management. And Joanie has been so good at finding ways to advocate effectively for her customers at Schnucks.”

Taylor is a member of the Retail Dietitian Business Alliance’s (RDBA) Advisory Board.  As a champion for health and wellness, she represents Schnucks and the customer in matters relating to food safety, labeling, and healthy eating.  In addition, for the past 25 years, Taylor has been in constant service to Operation Food Search, either as a member of its board of directors or as an advocate in between terms of her board service.  Operation Food Search is the premier hunger relief organization in St. Louis and Schnucks is their primary food donor.

Her Schnucks colleagues call her “Joanie on the Spot” for her ability to step in and serve as a representative of the people.

In 1998, Taylor received the Donald O. Schnuck Memorial Award for Customer Service, one of the highest awards in the company. The award is given annually to the Schnucks teammate who exemplifies excellence in customer service and integrity and honors late co-founder and Chairman Donald O. Schnuck.

Company Chairman and CEO Scott Schnuck remarked, “Over the years, Joanie has been at the forefront of some of the most significant challenges we have faced as an organization, including the 2003 work stoppage and the credit card challenge of 2013. Joanie and her team are the ‘voice of the people’ and we are tremendously grateful for their guidance and efforts to bring out the greatness in all of us every day.”